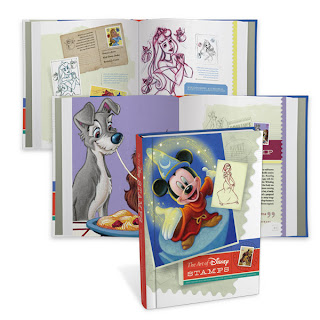 This just in from Don Brockway:

[CELEBRATING THE ART OF DISNEY

The Postal Service is introducing a new limited-edition book.

Also included in the Art of Disney Stamps hardback book are all 21 Disney-themed stamps, including an original Walt Disney stamp issued in 1968.

USPS issued five Art of Disney commemorative stamp series. Each series is based on a theme:

The Art of Disney, Friendship (2004) depicts Goofy and Donald Duck; Bambi and Thumper; Mufasa and Simba (from the “Lion King”); and, Pinocchio and Jiminy Cricket.

Art of Disney: Celebration (2005) features Snow White and Dopey; Alice and the Mad Hatter; Mickey and Pluto; and, Ariel and Flounder (from “The Little Mermaid”).

The Art of Disney: Romance series (2006) includes Cinderella and Prince Charming; Beauty and the Beast; Lady and the Tramp; and, Mickey and Minnie Mouse.

The Art of Disney: Magic (2007) has Mickey Mouse as the Sorcerer’s Apprentice; Peter Pan and Tinker Bell; Aladdin and the Genie (from “Aladdin”); and, Dumbo and Timothy Mouse.

The Art of Disney: Imagination (2008) set celebrated Pongo and Pepper (from “101 Dalmatians”); Princess Aurora, Flora, Fauna and Merryweather (from “Sleeping Beauty”); Steamboat Willie; and, Mowgli and Baloo (from “The Jungle Book”).

Any idea if it will go into more detail about the artists?

what do you want to know?