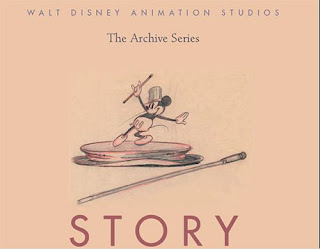 Since the long awaited Walt Disney Animation Studios The Archive Series: Story has just been released this week, I took the opportunity to interview the head of Disney's Animation Research Library to understand how this book came into being and the future of the series. I found Lella's last answer particularly exciting.

Didier Ghez: How did you get involved with this project?

Lella Smith: The ARL often provides images for book projects for clients throughout the Disney Company. (The library is the repository for about 60 million pieces of animation artwork at the Walt Disney Company.) We have wanted to do a book about the collections of the Disney Animation Research Library for some time and now we have the opportunity. We are grateful that John Lasseter and Disney Publishing are giving us this opportunity.

DG: What were your criteria to select the artwork?

LS: We wanted great images that would inspire artists and intrigue non-artists.
It was quite a challenge reducing the amount of artwork to fit the size of the book (approx. 275 pages). We had to make some hard choices and we are proud of the final selection.

DG: What were the most surprising discoveries that you made while selecting the artwork?

LS: According to Fox Carney, our lead researcher, here are his answers to that question: “We discovered the numerous styles of drawings that each epitomized the styles of the eras in which they were drawn. We studied the detailed pencil renderings of the early era of animation in the 1920's & 1930s. We marveled at Bill Peet's elementary yet evocative drawings that capture the stylings of the 1940s & 1950s. Every artistic period seemed to be on display through the decades as we researched the history of Disney animated films.

We learned how some animators lent their creative talents not just to character animation but engaged their artistry in telling the larger story. Marc Davis' story sketches capture the idealistic joie de vive of Bambi's youth. Glen Keane's powerful experimentation with charcoals and mixed media explode with the ferocity of the bear fight from The Fox and the Hound.

We learned, first hand, through researching these drawings how every individual sketch was a crucial work of art, not only telling the structure of the story, but each conveying the mood, style or essence of the full film itself.”

DG: For true Disney historians, what will be the highlights of the book?

LS: We searched our vaults for many hours on our own and we also met with John Lasseter and his Story Trust to find out about their favorite story moments. It was really interesting how many times that same works were mentioned.

The Dumbo images from the Roustabout scene are fantastic. Many of these monochromatic pastels were drawn rather quickly on construction paper but they are dynamic and they evoke the mood of the film beautifully.

Susie the Little Blue Coupe is another favorite because of the period style and humor.

DG: The title of the book strongly suggests that it is the first in a series. Could you tell us a bit more about the future of that series?

LS: When John Lasseter became the Chief Creative Officer, Walt Disney & Pixar Animation Studios, he thought of the idea of creating an Archive Series that would feature artwork one animation element at a time: Story, Animation, Design and Background/layouts.

We also want to produce smaller , supplemental books that focus on individuals, special sequences, etc. Our first book for this would highlight the artwork by the great story artist, Bill Peet.
Posted by Didier Ghez at 1:11 AM

Wow, the last statement is intriguing. Let's hope for many more in the series.

Thanks for sharing the interview, Didier!!!