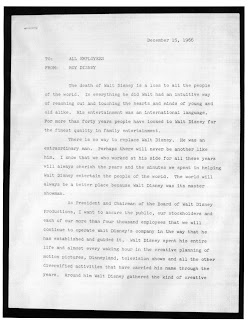 Jim Korkis sent me this memo from Roy issued just after Walt's passing on December 15, 1966. I should have posted it two days ago, of course. 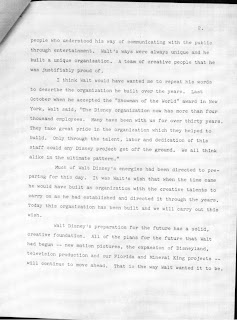 Jim also sent me the following note yesterday on two different subjects:
[Another great website that I keep forgetting to mention is http://coa.inducks.org. It lists to the best of everybody’s knowledge the writers and artists of Disney comic books. You can search by character or artist or by specific title. I use it to find information on some of the live action movie adaptation comic books although I was also able to use the site to find out that it was artist Tony Strobl who did the artwork on the giveaway comic book that featured the Florida Orange Bird. The site also includes foreign Disney comic books so I was able to find that the Disney Christmas comic strips that appeared each December in newspapers for many years were reprinted in color in foreign Disney comic books!

I do see you published the link to those great photos of Walt at the Song of the South premiere. Now all we need is some identifying captions on some of them since I don’t have a clue who some of those people are. The site: www.songofthesouth.net is a very good site and they have a link to an article where two mannequins were recently discovered (of Uncle Remus/Johnny) in Atlanta that were given by the Disney Studios to showcase at the premiere. Apparently, they were put in an attic and forgotten for decades and just recently re-discovered. How exciting that there are so many things still to discover about Disney history.]
Posted by Didier Ghez at 1:55 AM

Thanks for posting the memo! It was a great piece to read.
-Bob