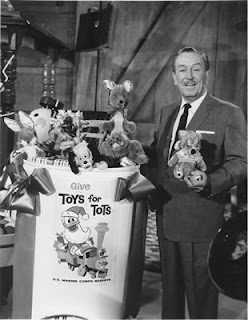 Here is a great article just in from Jim Korkis about Walt Disney and the Toys for Tots program:

[Toys for Tots began in 1947. Walt Disney became involved the very next year by having the studio design the Toys for Tots train logo that is still used to this day.

Why a train for the logo? Well, perhaps it had something to do with the fact that Walt had just returned from the Chicago Train Fair that summer and was already thinking about building a miniature railroad at his home.

Walt was also responsible for the first poster ever created for the campaign in 1956. It featured Donald Duck dressed as Santa Claus driving the Toys for Tots logo train. Over the years, Mickey Mouse, Dennis the Menace, Bugs Bunny and Captain America have been on various Toys for Tots posters.

Walt became involved with the group when he was contacted by the then Director of Public Relations for Warner Brothers Studio, Major Bill Hendricks who was part of the Los Angeles Marine Reservists. In 1947, Hendricks’ wife Diane had made a Raggedy Ann doll and asked her husband to give it to an organization that helped needy children at Christmas. Hendricks discovered no such agency existed so he started his own with the help of fellow Marines who collected and distributed new and used toys. The Marines used to refurbish the used toys on Reserve drill weekends but since 1980 have only collected new toys.

Kelvin Bailey, a reserve Marine officer and one of the Disney Studios pilots for the company plane, bumped into Walt in a hallway in 1965 and told him that even though the program had been around for seventeen years, it could benefit from a little Walt Christmas magic. Bailey was also the public relations man for the project.

Walt agreed and filmed a special television spot to promote the need to help children. Standing beside a barrel filled with new toys, Walt told television viewers: “Your local Marine Corps Reserve is doing everything possible to see that no unfortunate child is denied the pleasure of having a present to open this Christmas morning. Through their Toys For Tots campaign—and with your help—this can be done. If you’ll place a new toy in one of these barrels, the Marines will be happy to do the rest.”

Walt ‘s active participation in 1965 resulted in over a million children receiving Christmas presents who would not have had a visit from Santa that year. It was an increase of seventy percent over the previous year so in 1966, Walt was once again requested to make a television pitch.

Walt not only did so but drafted the Disneyland characters and actress Greer Garson, who was filming “The Happiest Millionaire” on the lot, to make appeals.

“Yes, Dad was really was dedicated to Toys for Tots. You might find in archives a photo of Chris, our oldest child, accepting an award on his grandpa's behalf the year after he died,” Diane Disney Miller, Walt’s daughter, wrote to me recently.

Walt was very quiet and modest about his charity work which was quite extensive from his support for the John Tracy Clinic, a facility for deaf children and their families, to the children’s wards at St. Joseph Hospital decorated by Disney artists to countless other unsung acts of generosity.

At this time of year, we can honor Walt’s legacy by thinking of those, especially the children, who are less fortunate that us and contribute what we can to make sure that everyone has a very Merry Christmas. ]

That is a great story. I agree, that not many people are aware of the charitable work of Walt and the Company.