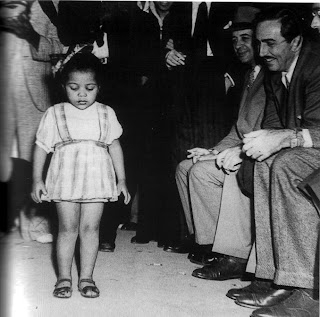 This just in from Celbi Pegoraro:

I really liked the Carousel of Progress/Carl Bongirno history and the american election posts. Let´s hope we can have a world a little better from now.

I would like to share with you a really nice picture of Walt Disney visiting Portela Samba School in Rio de Janeiro (1941). You know the original plan was to Walt visit Portela to see the Samba dancing presentation for only a few moments but he liked so much that spent hours there. As you know the Brazilian government at that time didn´t like the idea to show the so called "african inspired" samba to the Disney crew. In the end this was one of the highlights for the touring group. This picture shows Walt watching a little girl dancing Samba.

I hope to share more pictures from my research - Disney in Brazil book in the near future.]

This is so cute! It seems typically Walt to go against predictability and spend hours in what he was expected to be a few moments. How nice there is a book coming of his visit to Brazil, can't wait!