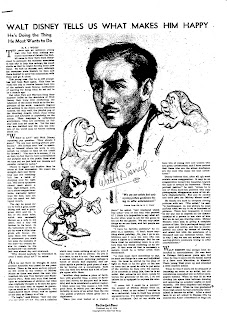 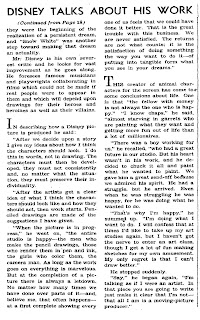 Gunnar Andreassen has kindly sent me various articles from the '30s from the New York Times. I will post a few of them during the next few days for your enjoyment.The first one is an interview of Walt conducted by artist S. J. Woolf.
Gunnar sent us the following background about Samuel Johnson Woolf (1880 - 1948):

[One of America's greatest twentieth century portraitists, Samuel Johnson Woolf was equally accomplished as a painter, lithographer and illustrator. He studied art in New York at both the Art Students League and at the National Academy of Design, under Cox and Brush. Early in the twentieth century he established himself as a great portrait painter and his work was frequently exhibited at such major institutions as the Metropolitan Museum of Art, the New York Public Library, the University of Michigan, the Carnegie Institute, the Corcoran Gallery, the Pennsylvania Academy of Fine Arts and the National Academy of Design.

During the First World War, Samuel Johnson Woolf was appointed a special correspondent with the American Expeditionary Force and painted the portraits of Joffre, Pershing and other commanders. Both his lithographs and paintings received many awards during his distinguished career. Some of these are the Hallgarten Prize, National Academy of Design (1904), the St. Louis Exposition (1904), the Appalachian Exposition (1910) and the Paris Salon Medal, Paris, France (1937).]
Posted by Didier Ghez at 1:46 AM