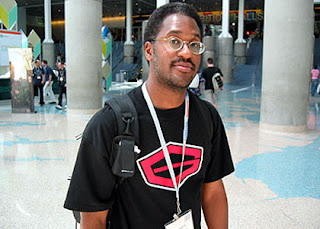 Animation writer and critic Emru Townsend who had been diagnosed last December with leukemia passed away yesterday evening at the age of 38.

Emru had founded the Frames Per Second Magazine in 1991 and had been a penpal of mine since the launch of Walt's People 4 years ago.

Amid Amidi said about him in February this year: "Emru has for decades been one of animation’s best friends and most intelligent critics."

Let me add that Emru was really an astounding human being. When he was diagnosed with leukemia, he and his sister Tamu started a worldwide campaign to promote bone marrow donations. This campaign was amazingly successful and generated unbelievable amount of TV and press coverage. Emru until his last few days also maintained a mailing list that kept us all informed about what he was going through. Every single one of those emails (including the one where he announced that he would soon die) were full of an infecting sense of humour. I have never - and I mean never - seen anyone stay so positive and full of life right at the gates of heaven.

He is someone who in my eyes will clearly never die.

The upcoming Walt's People - Volume 8 is dedicated to him.
Posted by Didier Ghez at 12:39 AM

Beautiful things you said about him, Didier. Nice to know he was so positive at "the gates of heaven".