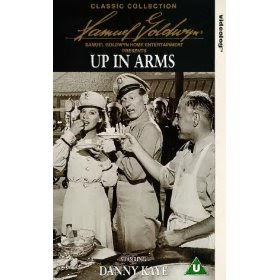 Regarding Mark Sonntag's question yesterday about the planned animated section from the movie Up in Arms, Jeff Peterson writes:
[I found some notes listed on the Turner Classic Movies Web site (www.tcm.com) for this film: "Although a September 1943 Hollywood Reporter news item announces that Disney would prepare an animated sequence for the film's climax, there is no such sequence in the final film." The date of this news item matches the dates of the letters and memos that Mark has acquired.

A Web site on "Hollywood Renegades" has a footnote referring to Charles Solomon's "The Disney That Never Was" (pages 76-77) and says, "The 'Up in Arms' animation, which was believed to have been destroyed, resurfaced in a film print uncovered by the Disney company in the late 1990s." I do remember reading this text, but, unfortunately, I no longer own this book (along with the rest of my library) so I can't check it out.

Here is an excerpt from this "Hollywood Renegades" text:

Goldwyn prepared his latest release Up in Arms (1944) as a showcase for his recent discovery, comedian Danny Kaye. Hoping that Kaye would become a valuable asset for Goldwyn’s independent company, the producer spent $2 million on a lavish Technicolor musical to serve as the comedian’s film debut. The producer even requisitioned the Walt Disney Studio to create an animated finale for the film’s climax. (After great expense, the Disney animation was cut out of Up in Arms by Goldwyn, who was accustomed to making last minute—and usually very costly—changes in production while searching for the most suitable final product.)

Finally, an article by Jim Korkis about Ub Iwerks on JimHillMedia.com from September 2003 briefly mentions that Iwerks worked on the animation for this deleted sequence from "Up in Arms," but it has no other information. Of course, Ub Iwerks was copied on the 9/14/43 memo, and within the coming year he would develop the process for combining live-action and animation as used in "The Three Caballeros."]
Jim Korkis adds:
[Disney produced about a minute and half of animation directed (and according to some sources animated) by the legendary Ub Iwerks for the film “Up in Arms”. It was a bunch of weird creatures called the “Weavie-weavies” who literally ate up the screen image when Kaye’s character was in a desperate situation at a cave, I believe. The actual animation still exists in black and white in the Disney vaults although it is doubtful it was ever incorporated into the final film. Interesting, this arrangement originally came out of a proposal where Disney was going to do a co-production with Goldwyn on a film about Hans Christian Andersen where a live performer playing the writer but animated sequences showcasing the Andersen stories. (Goldwyn later released a live action film on the life of Andersen with Danny Kaye about twelve years after the discussions with Disney on a co-production.)]
Posted by Didier Ghez at 12:48 AM

Labels: Up in Arms

This is great stuff, thanks Didier and everyone else who contributed to shedding some light on this forgotten project. I wonder if the sequence exists in a vault somewhere at Goldwyn Pictures.