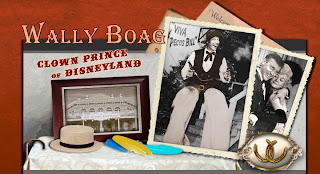 I was browsing yesterday and stumbled about this exciting upcoming book. Not much information yet, save for that publicity text:

[Wally Boag delighted audiences the world over for six decades. Although most of his fans associate his comic career with “The Golden Horseshoe” at Disneyland, his story really begins much earlier than this wonderful relationship with the Disney organization. This delightful book recounts the saga of a farm boy from Portland Oregon “making it big” in the world of vaudeville as a “hoofer” and a comic rolled into one. His early days were those of the quintessential artist struggling to find his niche in a world of talented artists all competing for the same spot. He, like all successful entertainers, stood out early and he soon found his way onto the “circuit.” He would eventually entertain kings and presidents, American troops at home and abroad, thousands of vaudeville and nightclub patrons on three continents, and millions of Disneyland guests.

The Disney organization appreciated Wally so much that it engaged his talents in a gamut of enterprises ranging from performing on its television shows and in its films, to script writing and show development. In these pages one can follow the adventures of a gifted man and see how he shared his laughs with the world. This is a must read not just for all of those interested in the Disney Legend, but in the path taken by a trail blazer in the world of Vaudeville and one man’s voyage through the labyrinth of the entertainment world of the twentieth century.]

I have requested more information from the publisher and will post it as soon as I get it.

Can't wait to see more about it.