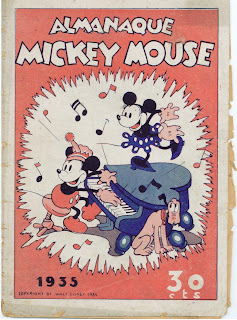 I have received on Monday one of the latest drafts of a manuscript for a book that I have been awaiting for the last 4 years. Written by Spanish journalist Jorge Fonte and comissioned by The Walt Disney Company Spain, it covers the history of Disney in Spain and Portugal since the '30s until the early part of the XXIst century. From what I have already read and from the very early draft layout I have seen, this book will be a key reference for serious Disney historians and Disneyana collectors alike.

I believe it will be released at the end of 2009. The only major drawback for readers of this blog is that it is written in Spanish.

I can't tell you how excited I am by the fact that serious research is finally appearing about Disney outside of the US. The first key book on the subject was Wie Micky unter die Nazi Fiel by Carsten Laqua (Sachbuch, 1992) which covered the history of Disney and Germany. The second one will be Jorge Fonte's. Two good friends of this blog (and of mine) are researching in-depth the history of Disney in Brazil. I hope someone will soon tackle the UK and France.

As for me, I am trying to save at least one manuscript, which would have critical historical value when it comes to Disney and France. We will see if I succeed.

The illustration for this post, by the way, is a very rare Almanac launched in 1935 in Spain. The 1936 one is much more common. This one is a true rarity. 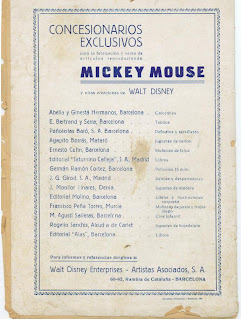