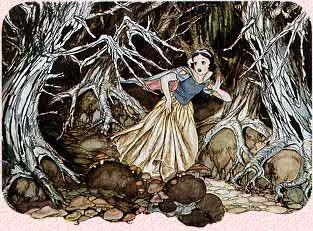 I like the fact that Disney Editions, after having released two books illustated with concept art by Mary Blair (with at least one more to come) is now starting to display great concept art by other key Disney artists.
Posted by Didier Ghez at 12:15 AM

My reference library is in the bedroom and my wife is asleep, so i can't check right now, but wasn't there already a Tenggren illustrated SW book published in 1938?

By Grosset and Dunlap, if I recall? All the illustrations in the 1938 book were concept art by Tenggren, no?

I'll look for the name and publisher of the 1938 book Friday night. Maybe this one listed on Amazon is a reprint?

Yes you are completely correct about the Grosset & Dunlap book (of course!). That being said the book listed on Amazon is only 60-page long, much shorter than the Grosset and Dunlap one. My guess is that it is a brand new book.

That being said, that is just a guess and I may be totally wrong. I will try and get more info about it when my contact at Disney Editions comes back next month.