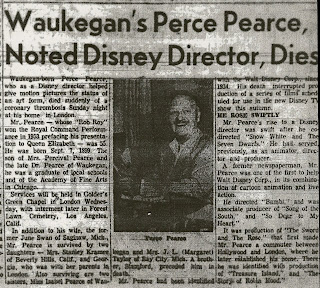 This just in through George Grant:
[By now you must be inundated with Perce Pearce material, but in case no one has sent you that obituary yet, here it is. This was printed from a microfilm copy of the Waukegan News Sun, dated July 5, 1955. The obit appeared on the front page of the paper, and the information in it was likely supplied by his sister, Isabel Pearce.

Percival C. Pearce was born Sept 7, 1899, to Dr Percival Pearce and Jessie Cook Pearce. He was born on his father’s birthday, which likely settled the issue of what to name him. His father was a physician-surgeon and sometime druggist. He had two older siblings: Stamford W. Pearce, who passed away at an early age, and Isabel Pearce. He may also have had a younger sister Margaret, according to his obituary.

His grandfather, W.S. Pearce, had been apprenticed to a druggist in Essex, England, before immigrating to the US. This grandfather settled in Waukegan, Illinois, around 1859, where he raised a large family and invested shrewdly in local real estate. Two of his sons (including Perce’s father) and one of his daughters became physicians, another daughter became a teacher, and yet another daughter, Winifred Pearce, became an artist. She also taught art to students, and operated a small art supply shop. (It was Perce’s uncle, Dr William W. Pearce, and not his father, who served as mayor of Waukegan).

Perce evidently took after his Aunt Winifred, who lived two blocks away from him. He is listed in the 1916 edition of the Waukegan City Business Directory as a cartoonist, at the age of sixteen, and the listing continues through 1919, when he lit out for Denver, Colorado. His first published work was a series of cartoons for the Great Lakes Bulletin, a military newspaper serving the US Naval Training center at Great Lakes, Illinois, just a few miles south of Waukegan. He appears to have been hired for the job by a news syndicate called the Publicity Feature Bureau.

Perce’s cartoon series was named after its hero, Seaman Si. There are images of this series available around the internet, but if you need any others, let me know. The series ran in the paper, was collected into a soft-cover edition in 1917, and reprinted in book form in 1918. At the same time, Perce did editorial cartoons and political caricatures for his news agency, some of which appeared in the New York Evening Post, and were later included in a 1917 article in Cartoons Magazine called "Under the Big Dome" by Elisha Hanson (v. 11, no. 4, Apr. 1917).

In late 1919 Perce left his original position to work directly for a Denver newspaper as a cartoonist. He took a room in the house of John Cory, who was also a cartoonist for the same paper, along with a third cartoonist, Charles Cahn. (I don’t know the name of the paper, but suspect it was the Denver Post).

He worked as a cartoonist in Denver through 1920, but my trail of information on him dries up until 1930. He appears in the federal census for that year in Bay City, Michigan, as the president of his own company. He was still single, but within a year would marry June Herrig Swan, the daughter of a commercial salesman. June was born June 11, 1899, but in later years would shave months or even a whole year off her age, to hide the fact she was older than her husband. According to his obituary, Perce and June had two daughters, Anne and Georgia, both born in Michigan.

According to his obit, Perce started working for Walt Disney around 1934. I have no information on that, but can vouch that he and his wife were consistently registered to vote in Los Angeles County from 1938 through 1954. They initially lived at 1551 N. Stanley Ave in 1938, were both Democrats, with Perce giving his occupation as “artist”. By 1942 they had moved to 8050 Selma Ave, while Perce’s occupation was now “Director”, and later became “Producer” in 1944. He switched political parties to Republican in 1948.

One other unrelated item of information; besides the Southampton to NYC voyages already mentioned in your blog, Perce is listed as traveling from Honolulu to Los Angeles on the SS Mariposa, from Aug 31 to Sep 5, 1938. He was in first class as usual, and hence likely traveled at studio expense, but was not accompanied by his wife or daughters.

It is wonderful to add to the knowledge.

Fantastic. Thank you so much for shedding light on someone who helped create the magic, but seemed to be neglected by Disney researchers.

Pearce mentored my father Carl Fallberg when they were paired by Walt Disney to write "The Sorcerer's Apprentice". He was 16 years older than my father. My dad so appreciated his help and admired his background in the newspaper field. I just recently discovered that Perce's granddaughter, actor Casey Kramer was cast in a play at the Fremont Centre Theatre, "South of Delancey" while I too was working there as house manager! I had no idea she was part of our "Disney Brat Family" but hope to get in contact with her soon. Casey is the daughter of director Stanley Kramer and Perce's daughter Anne.