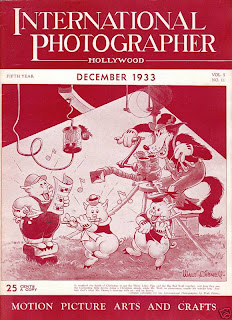 This just in from Gunnar Andreassen:
[For sale on Ebay just now, see enclosure.

This is an original issue of "INTERNATIONAL PHOTOGRAPHER, MOTION PICTURE ARTS AND CRAFTS", the December, 1933, Volume 5., Number 11. edition of the Magazine, published in Hollywood, California. "This magazine represents the entire personnel of photographers now engaged in professional production of motion pictures in the United States and Canada.", according to the copyright page, with credit also given to Local 659, I. A. T. S. E., and M. P. M. O. of the USA and Canada.

This rare issue featured a nice range of articles by various experts in the field, including an interesting piece on "THE STORY OF SLIDES AND TITLES", by Earl Theisen, "MOTION PICTURE IN INTERNATIONAL UNDERSTANDING", BY WILLIAM A. REID, "MOTION PICTURE SOUND RECORDING", by Charles Feldstead, and pieces on Cameramen, The Camera in the Everglades, Lab Men, The Newsreel World, Cinematographer's Note Book, Television Sets Football Record, and Classifieds, etc., plus great period advertisements throughout for technical products and services, much in the Art Deco style of the period, and of course the very nice cover illustration concocted by Walt Disney himself "in the spirit of Christmas...to get the Three Little Pigs and The Big Bad Wolf together...", drawn especially by Disney for the Magazine.

On page two of the magazine is written:

"OUR COVER FOR DECEMBER

The International Photographer is proud of the front cover for December.The subject is popular and timely and the art department of this journal enthusiastically hails the co-operation and good will of Mr. Walt Disney and his amazing assortment of livestock mad famous by the genius of himself and his extraordinary organization.In considering the aforesaid genius of Mr. Disney the reader will certainly call to mind, also, the large part taken in the production of the "Three Little Pigs" cartoon by Technicolor, whose new three color system has added so much to the attractiveness of this delightful novelty."]
Posted by Didier Ghez at 1:07 AM

This had an opening bid of $45. Great Christmas related cover illustration. I thought of placing a bid but something else has caught my eye...

David: Don't forget to warn me if you want me to avoid mentioning some ebay sales on the blog :-)