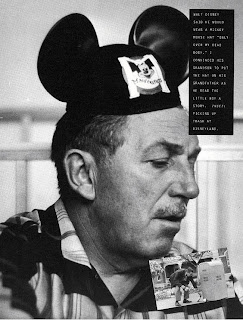 [Here is a photo of Walt picking up trash from the book “When Hollywood Was Fun” by Gene Lester. Gene was one of the many “celebrity” photographers working for magazines like LIFE. At one time, he actually had a Disney movieola that was used for the early Mickey Mouse cartoons and Snow White. Anyway, here at two great candid shots. The only shot of Walt wearing a Mouseketeer hat and a picture of Walt picking up trash at Disneyland.

These were not posed but captured by “happy accident”.

For more of the story go to the website Outside the Berm.]