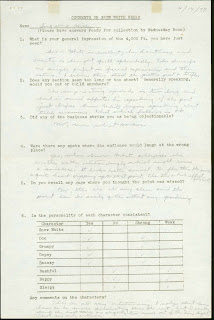 This just in from the collection of Bob Cowan. Bob mentions:

[The survey used after the screening of a reel of Snow White.

Frankly, I think this is one of the more valuable items in the collection. Probably because of my business... I liked the idea that they were using an early form of Focus Group that went beyond the animators sitting around. These surveys were completed by any employee that saw the reel (except in this case when Ingeborg Willy kept her survey). Based on some of the fundamental questions asked, it would seem logical that what they saw was a fairly rough version -- if a lot of time had gone into the production, then there would not have been much willingness to ask questions about issues that could not be changed.] 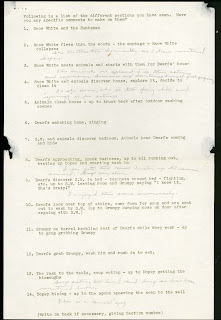