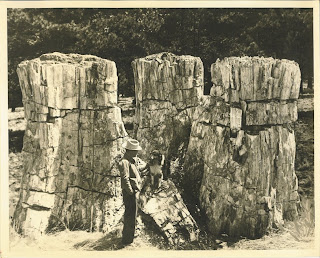 Here is the caption:

[Before it became the Florissant Fossil Beds National Monument, a dear friend of ours named Jack Baker used to own the Pike Forest Fossil Beds, located in Florissant, Colorado. Walt Disney visited Jack's tourist trap on July 11th, 1956, and bought a petrified stump for Disneyland. Jack was quite the promoter, and took this picture of Walt next to these petrified trees. Jack plastered that image on brochures, souvenir plates, and everything else he could think of.]
Posted by Didier Ghez at 1:09 AM