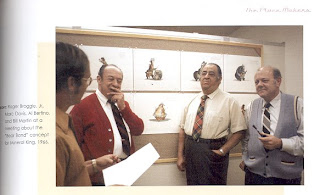 Marc Davis, Al Bertino and Bill Martin in front of Marc's concepts for what would become Country Bear Jamboree.

I received three books from Disney Editions on Monday: Walt Disney's Legends of Imagineering and the Genesis of the Disney Theme Parks, Walt Disney World: Then, Now, and Forever, and Disney's Dogs (not yet officially released). Two out of those three are great, one is underwhelming (to say the least). I will review all three here between this week and next.

Jeff Kurtti and Bruce Gordon's Walt Disney's Legends of Imagineering and the Genesis of the Disney Theme Parks is a pure delight and an essential reference. While Jeff admitely did not conduct new interviews for this book, an analysis of his bibliography reveals that he had access to many never-released-before documents. Since Jeff's books are also consistently well written it is no wonder that both the form and the substance of this book are top-notch.

If you are a serious Disney historian, you will of course have had access to a lot of the information in this book through other sources like The E-Ticket, but Jeff's synthesis is of extreme value as it helps introduce those great artists to the general audience, while providing an easily browsable source of information for Disney history enthusiasts.

I sincerly hope there will soon be a volume 2 available. My only request to Jeff would be to try and include a few more never-seen-before photographs of the artists and their work. But that is just me, of course: I always would like to get a lot more than what is offered.

In summary: Walt Disney's Legends of Imagineering and the Genesis of the Disney Theme Parks lived up to expectations and then some. A "must-have".
Posted by Didier Ghez at 12:49 AM