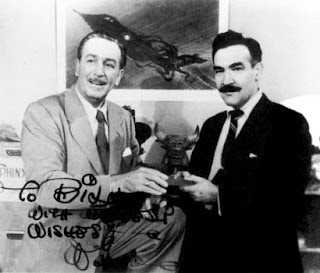 A few months ago, while in New York, I had the chance to meet John Culhane for the first time. John was kind enough to praise Walt's People and mention that he would soon start contributing to the project.

This is especially exciting as John has conducted taped interviews with Disney artists that no one else ever interviewed on tape: John Lounsbery and Bill Tytla among others. When I mentioned this to John, though, he objected about Tytla. "There is another taped interview that exists. I saw someone interview Tytla in Montreal in 1967. The person who interviewed him - I can't remember her name - was the daughter of a famous French director." I could not let this go by. A few weeks after that meeting I realized that the person who had conducted the interview was Louise Beaudet, who passed away in 1997 after having directed for many years the Cinémathèque Québecoise. I then contacted the Cinémathèque Québecoise and true enough, they had an unreleased interview with Tytla on tape.

I have now secured a digital copy, thanks to the help of David Lesjak, Michael Barrier, Mark Sonntag and Don Peri. There are no surprises in the interview. I do not have the rights to release it in Walt's People and will not try to get those rights as the content does not justify any efforts. However, I thought some of you might like to hear Bill's voice for the first time. As you are aware of my passion for Brazil, it will not come as a surprise that I chose an excerpt where Tytla discusses his animating Jose Carioca.

Click on this link to reach the page where the interview excerpt is hosted. Wait a few seconds till it loads, as it is a pretty heavy file.
Posted by Didier Ghez at 2:39 AM

Nice to hear New York in his voice. To be honest, it sounds exactly like the voice I imagined.
In some ways it sounds close to Bill Melendez' voice, to me.

Wow, I finally know what Bill Tytla sounded like. A little bit different than I expected, but it's him alright!

Thanks for putting that little excerpt up for everyone to hear, Didier!

Very cool to actually hear him speak! Thanks for this.

By the way, I just ordered volumes 5 and 6 of "Walt's People", can't wait to read them!

Where is there a download on that page? Nothing loads automatically, Tytla_web.wav isn't a link, and the rest are ads!

It should load automatically. As you can see from other comments on this page it seems to work for a lot of other readers. Not sure what is going on on your side unfortunately.

I'm not getting anything either, does this page work on macs?

Talking about Brazil, I know a gentleman there whose parents were visited by Walt Disney. I was told that Walt was introduced to the "papagaio" (parrot) in their house. It seems there are interviews given by this gentleman's sister, about this. Do you know anything about it? Shall I try to find out more from them, or would you like to contact her yourself?

LInk doesn't work at all.

I would like to know the name of that person although I tend to take those things with a "grain of salt".