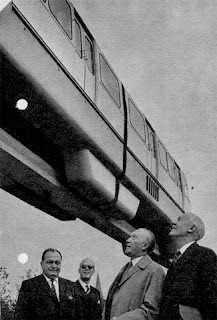 [The Randy Bright book (The Disneyland Inside Story, 1987) and the Mechanical Engineering citation (1986) both have the story that Joe Fowler found the Alweg monorail and then told Walt. In the citation version, Joe Fowler AND Roger Broggie find it together, which is possible, as both of them were sent to Europe together to work on Brussels' World's Fair. Disney helped with the American Pavilion. Walt also told them to look for rides/attractions/curiosities to bring back to Disneyland.

According to an Alweg company archival Web site (and most of today’s Disney historical sources), Walt Disney saw the first full-scale Monorail test train in 1958 while in Germany. He and Lillian were driving down the road and saw the saddleback monorail zooming overhead by accident and Walt followed the track and was confronted by people who only spoke German.

After determining he wanted something similar for his theme park, Walt sent Disney Legend and former Imagineer Bob Gurr to Cologne, where he helped develop a scaled down Alweg line for Disneyland. On Oct. 20, 1958, Gurr presented his first designs of the Monorail train to Walt Disney.

Todd James Pierce has also located two articles that appeared in the Los Angeles Times in early 1957 that clearly describe the ALWEG monorail system and also give the location of the test track. These were not small articles hidden in the newspaper since they were describing a possible deal to have an Alweg monorail system in Brazil. So the Alweg monorail was not a secret before Walt discovered it.

So, what’s the real story? Is it the now accepted version that it was Walt who discovered the monorail by happy accident or did some of his top people find it and passed along the information to Walt?]

let me add a little to this: there's also a Marvin Davis interview (1968, I believe) in which Davis claims that Flower visited the monorail months before Walt looked for it in Germany.