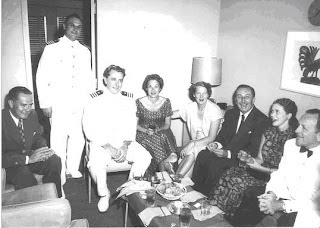 Now, my question is, what is the rest of the story? When was this picture taken? Anne says that she remembers her Aunt Nita talking about Lillian, Walt’s wife, coming to visit her shop and that Lillian was very nice. ]

[Walt (and Lilly and Diane and Sharon) sailed back from Italy to the U.S. on the Independence in both August 1951 and August 1952, according to the immigration/emigration records available online, but Walt looks a little older in your photo than I would expect him to look on those dates. He and Lilly flew back from London on Pan Am after their summer 1953 visit.

Unfortunately, the online records extend only up to 1957, so if Walt sailed back on a later date (as opposed to flying, which he did most if not all of the time from the late '50s on), there's no easily accessible record of that.]
Posted by Didier Ghez at 2:50 AM

Hi. I love your blog. It is just terrific. I was just a friend's house and they have some original art from the Disney studios, most of which have to do with Gen. Seversky. They are interested in finding the value and also curious about them. Any ideas? I took pictures of some of them, in case you'd like to see them. Again, I love your blog and have book marked it. Wonderful!

Thanks for the kind words. I would love to see those. Please email me privatly at dghez@hotmail.com