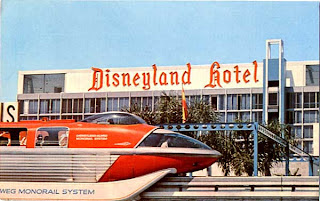 [For the first time in more than 20 years, a brand-new Monorail placed its wheels on the beams of the Disneyland® Resort, as Monorail Red arrived Dec. 20, 2007 and began making test runs this month.

Monorail Red is the first in the fleet of new Mark VII Monorails waiting to debut at the Disneyland Resort.

“We had a great opportunity to invent what the Monorail Mark VII would be,” said Scot Drake, lead creative designer for the new Monorails. “We took advantage of the Disney heritage of the trains and were really inspired by the original concept sketches by Bob Gurr. There’s that optimistic future the original Mark I Monorails were trying to depict and that vision is something we still want to carry on.”

For nostalgia sake, here are two photos of the classic Bob Gurr red monorails that Disneyland guests saw for decades starting in 1959.] 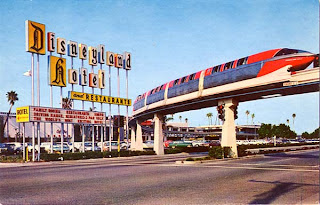 Although Gurr's 1959 monorail is closely tied to the esthetics of the period, I think it still really looks sharp today. Not as a piece of nostalgia or camp but as a design. No succeeding design ever worked so good. Perhaps it's the old saw about committees make camels, artists make horses.

Nothing says "The World of Tomorrow -- Today" like the bubble on top. Bring Back the Bubble!