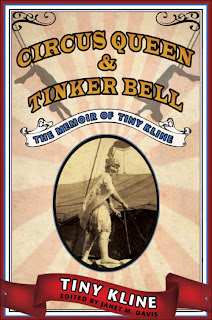 [Circus Queen & Tinker Bell: The Memoir of Tiny Kline, edited by Janet Davis, will be published on July 28.

Tiny Kline was the circus acrobat who was the first Tinker Bell at Disneyland who flew off the castle. Wade Sampson has a column about her on Mouseplanet a year or so ago.

On the Tiny Kline book: If you are a Disney fan, you will be disappointed since the only information on Tiny and her stint as the first flying Tinker Bell at Disneyland are on pages 19-22 and one of those pages is a full page photo of Tiny in her Tinker Bell costume and the other three pages spend most of the time talking about Tinker Bell as a character. There is about one or two paragraphs about Tiny herself as Tinker Bell. Apparently the author contacted Becky Cline and discovered that not much information exists. However, I discovered two news things in those paragraphs. First, that Tiny first flew as Tinker Bell at a Hollywood Bowl concert before Disneyland. Second, that she was dying of cancer when she made her Tinker Bell flights when she was seventy some years old. The rest of the book covers her colorful life from burlesque dancer to working in the circus along with excerpts from her never before published journals. So, it is a good book but for Disney fans, there is not much there to justify the purchase except for fanatics like me.]
Posted by Didier Ghez at 12:27 AM