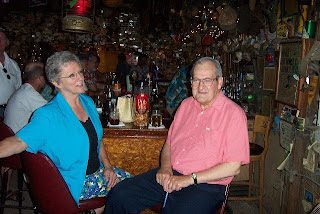 [The Big Bamboo was a small little bar near Walt Disney World that was home to many Disney cast members over the years and a favorite of late Disney Legend Ralph Kent. More information on the place can be found here: http://www.bigbamboolounge.com/.

It was decorated with artwork and artifacts from those who opened WDW back in 1971 and although it looked a little frightening stuck back off 192, there were some strict rules including that if you bothered a woman there you were only given one warning and then kicked out. It was also near the fabled "Snow White Village" where the first WDW college students were housed until housing was built at Vista Way. Unfortunately, the hurricanes in 2004 caused such damage that the place closed and never re-opened. However, apparently the legend will still live on when next month the new version of the Big Bamboo will open. More information can be found here: www.nubamboolounge.com. This project is spearheaded by a WDW character artist who was trained by Ralph Kent and who has obtained some memoribilia (including the recipes for one of the famous drinks served at the original lounge) to utilize at the new location that is right across the street from the memory of the original lounge.]

I frequented that little bar when I worked at EPCOT in 1987-88. I was employed at the Canadian exhibit in World Showcase.

The original owner, I recall his name may have been Bruce??? was a former World War II pilot, who flew off the aircraft carrier USS Bunker Hill. He had the place set-up like a small bar you'd find on a South Pacific military base during the war.

There were fishing nets with glass ball floats strung around the ceiling and he played the most delightful 1940s big band music - it was like stepping back into time.

He served his drinks out of glass mason canning jars and used big wooden wire cable spools as tables.

The place was decorated with a wide variety of eclectic memorabilia and he was quite a character.

The place was a favorite haunt for many EPCOT employees.