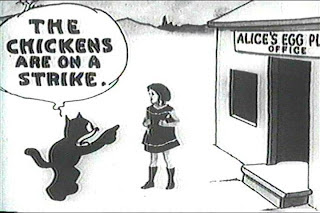 And here is the second mystery of the day.

I received today a short series of three letters from Thurston Harper to Dave Smith that will be released in Walt's People - Volume 9.

Thurston Harper was an artist working for Disney during the Alice Comedies era and therefore fills a few small gaps realted to those days at the Studio.

However, Harper also mentions that he returned to the Disney Studio from 1935 to 1937. I need to know more about Harper. Would anyone have a way to tell me what projects he tackled from 1935 to 1937 and when he passed away (probably in the '80s or '90s, since he was still alive and in good health in 1978)?

Thurston Harper (1903-1987) was among the first handful of people at the Disney Bros. Studio in 1924. He also worked at Harman-Ising 1936-38 and probably worked on Merbabies (which may be the reason for the later 30's Disney connection.) He later surfaced at Fleischer Miami for Gulliver and Mr. Bug (Hoppity) Goes to Town. I find no trace of him in the industry beyond that.

Thanks Joe. Yes, that would be pretty consistent with what appears in his letter and what Michael Barrier just found.

Here is what happened next in his own words: [I went to Gaumont-British and when they folded in 1938 I signed with Paramount and joined the Fleischer Studio in Miami where I worked until 1942 when I asked for a commission in the Navy which ended my career in animation. In 1968 I sold my advertising company in Charlotte Amalie, St. Thomas, V.I. to retire and live the lazy life.]

He did comic books published from 1943 to 1948. In 1943 he did work for Dell (on Looney Tunes)and 43-45 for the Sangor Shop (producing comics for Standard) and then for DC Comics from 1945 to 1948. Some of these he likely did moonlighting from animation and the military.

Thanks Steven. This helps tremendously. Amazing how much info we can gather when all the historians work together!