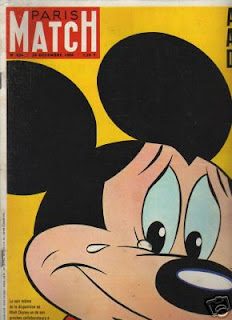 This is by far the most famous magazine cover to have appeared following the death of Walt Disney. Mickey crying was drawn by the French artist Pierre Nicolas, whom I had interviewed many years ago. I had a chance to conduct a follow-up interview with him two month ago, on March 13 focusing mainly on the creation of this cover. Here are his answers.

Didier Ghez: Can you tell me something about the events that surrounded the creation of your famous Paris Match cover?

Pierre Nicolas: It’s relatively simple. The day that Walt Disney passed away I was called by Armand Bigle that was the person in charge for Disney in France and even at the European level, in the offices of the Champs-Elysées. He put me in touch with people from Paris Match who took me to the office on rue Pierre-Charron where Paris Match was published. There the redaction committee took place, which included Thérond, the director of the editorial board, Pigneau that did the layout, Bourgeas, the art director, Croizard, the associate editor, Collette Porlier and Mrs. De Saint Edvire. We discussed for a while about what should be done, because they wanted to do something about the death of Walt Disney and they were thinking about a cover. But as ever, when people speak about Disney, they want to put too much in. They wanted to remind people [on the cover] of each movie, each known character. But on the cover this would have been confusing. And it had to go to the printing house within the following hours. So I did not have time to do too complex a thing. So obviously I thought about creating the face of Mickey, thinking that it was the most simple and quickest idea. It was a bit of laziness but it was also a logical idea. So that is what I did. The only issue is that I was in the offices of Paris Match and there was not much there. They brought me to a small drawing office where I found some drawing supplies. It was at night! I had been called to the meeting at around 10.00PM and I finished the drawing around midnight or one in the morning, in a hurry. It had to go to the printer. I worked with some drawing tools that were not mine. I could have done much better with a full day in front of me and if I had been at home or at the Disney office.
In the following years, there was a party at the Club of the Art Directors to say that the Paris Match cover had received the award for best cover of the year. There was an award, of course, but to get it I would have had to spend 200 francs! So I refused. I thought this was amazing. I never even saw the award.

DG: This cover became very famous in the whole world. Were you surprised by this?

PN: It was the first, which might have made it famous. A few months or years after I received a phone call from a journalist from Paris Match who told me that the grandson of the CEO of Match had sold the original drawing of the cover in a gallery in New York, to someone called Andre Sheller.

DG: Walt Disney visited your offices once. Any special memories of that visit?

PN: No. He came only once and met with Bigle. Bigle introduce me, that’s it. Walt one entered my office by mistake while looking for Bigle and apologized in bad French. I found this funny as he seemed to blush. I thought it odd that such an important person would be so kind and would blush. But that’s it. I did bring him a letter from Bigle two days later at the hotel Plaza Athénée. I was never in contact with him, unfortunately.
Posted by Didier Ghez at 12:37 AM

What a touching part of the interview, Didier.

Thanks for sharing this.