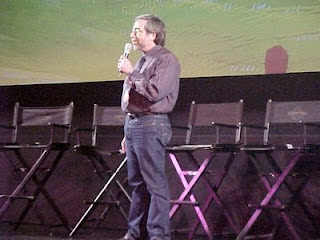 One of the books we are all awaiting eargerly is Charles Solomon's upcoming Disney Lost and Found: Exploring the Hidden Artwork from Never-Produced Animation due out in June. Charles was kind enough to answer a few questions for the Disney History blog.

Didier Ghez: You wrote The Disney that Never Was a few years back. Will Disney Lost and Found be a "Disney That Never Was - Volume 2"?

Charles Solomon: Disney Lost and Found is more of a companion book than a Volume 2. The format is different and there are more illustrations and less text.

DG: Why did you decide to work on that book? Can you run us through the genesis of that project?

CS: Ken Shue of Disney's publishing arm and Lella Smith of the Animation Research Library had begun the book, then asked me to come in and help with it. They had discovered some interesting new artwork that hadn't come to light when I was writing "Never Was."

DG: What is the most exciting material you have unearthed for Disney Lost and Found?

CS: I was excited to find the earlier versions of The Rescuers. Various artists had told me that the story went gone through two entirely different incarnations before they created the final version. I didn't think any artwork from the earlier stories still existed. The first, which was presented to Walt, stuck close to the original book: Bernard, Bianca and a mouse named Nils rescue a poet from a grim fortress-prison. The second version was a musical involving a singing bear and a crooked penguin in the local zoo who knew Penny before she was taken away. All that remains of that scenario in the finished film is the brief walk Bernard and Bianca take through the zoo at night.

DG: To create your did you conduct a whole new set of interviews with former Disney artists?

CS: Unfortunately, many of the artists are no longer with us. But some of the younger people, including Burny Mattinson and Andreas Deja, were very helpful. And in other cases, I could draw on interviews I'd done previously.

CS: I think you'll find a few surprises--did you know they considered bringing back Cruella DeVil in another film?

CS: It's divided into three sections: one on "Visions Lost and Found," from various films going back to Snow White, then sections on two recent projects: Wild Life and My Peoples.

DG: Even after having written The Disney that Never Was and Disney Lost and Found, do you think there is still a lot of hidden artwork from never-produced animation to be discovered?

CS: The ARL remains an Ali Baba's cave of treasures. And while some of the material is decades old, there are very talented artists at the studio who continue to produce extraordinary work. Paul Felix's original sketches for Tarzan were so beautiful, Peter Schneider moved the project from TV to Features. I love Dick Kelsey's sketches for Hiawatha and anything that Hans Bacher drew…the list goes on and on.

Sir,
are you interested in a trade of cartoons?
I could provide you animated shorts from every Studio (Famous, Terry, Lantz, MGM, WB..) in return of few Disney's rarities.

Thanks in advance and pard the OT,

This is a very exciting book. I'm still amazed this book was even allowed to happen.

Treasures should be shared -- and now it will be.

I am looking forward for this book. This is really great! It would be great if we could see a section on "Kingdom of the Sun".