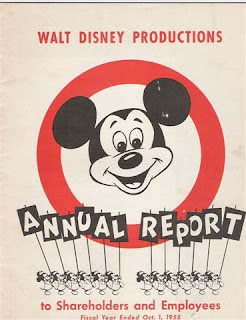 My friend Sebastien Durand just sent me the following email and I am wondering if some of you might help.

Were the Annual Reports to employees the same as those to shareholders in the '40s?

In the 1945 Annual Report, Grand Canyon and Latin Rhapsody were mentioned among the projects "in story" stage. Were these projects ever completed? I suspect Blame It on the Samba could be the definite title for Latin Rhapsody but what about Grand Canyon?]
Posted by Didier Ghez at 3:13 AM

Disney did produce the two shorts Grand CanyonScope (12/23/1954) and Grand Canyon (12/17/1958). The first 7 minute animated CinemaScope short has Donald Duck visiting the Grand Canyon as Ranger Woodlore narrates its various attractions. It is found on the 20,000 Leagues Under The Sea DVD set released in 2004.

The second is a 29 minute live action featurette showing scenes from the Grand Canyon set to Ferde Grofé's "Grand Canyon Suite." It can be found on the 2003 Sleeping Beauty Special Edition DVD, as it was shown with Sleeping Beauty on its initial run. This, too, was produced in CinemaScope.

Whether any of these two was the project originally mentioned in the 1945 Annual Report, I do not know.

Merci Hans for the information you shared.

I am aware of the Grand Canyon titles you mention. My guess is that is is probably not the "Grand canyon" short "in story" stage the 1945 annual report mentions since the short and the featurette heavily rely on a format (CinemaScope) that had not been invented then. Or, they could have been in preproduction for so long than the artists adapted them to the new format? I don't know, maybe you're right