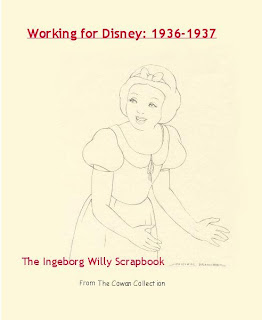 This just in thanks to Jim Korkis:

[Reproduction of a 1936 scrapbook made during Ingeborg Willy's first year working as an inker for the Walt Disney Studios. The scrapbook contains numerous photos of other Disney employees, internal memos, production work sheets, and a large number of original pencil sketches from the first feature-length animated film, Snow White, and other early Disney cartoons.]

This self-published book is definitely one I will pick up. Not so much because of the sketches, but because of the photographs of the Studio during the Golden Age. I will let you know more about it when I receive it.
Posted by Didier Ghez at 1:00 AM

Hi Didier- If you like photographs of the early Disney Studio, check out my blog Stuff From the Park for the last several Saturdays. I have been posting images of the Hyperion Studio from a member of the ink and paint department.

Those are GREAT. Thanks for sharing them. I will mention them on the Disney History blog tomorrow.

Matterhorn's find and subsequent posting of photos of Disney staff on the grounds of the Hyperion Studio have been absolutely awesome!

Mr.Ghez,
This seems like an interesting book.Im a big fan of your Walts People books.Are you happy with Xlibris?I have to make a decision soon if Ill be using them.Would you be able to give me some feedback?
Enjoy your blog!

They are quite reliable, if a bit slow these days.