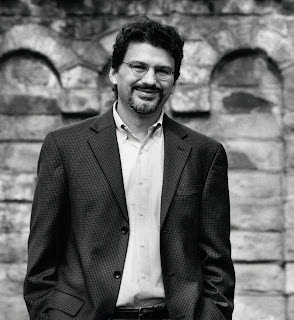 As you know, one of the books I am really looking forward to see released next month is The Pixar Touch: The Making of a Company. I had a chance of reading a review copy and I can already tell you that it is both a page-turner and an extremely well researched book.

Its author, David A. Price, was kind enough to answer a few questions for the Disney History blog.

DP: I had spent around five years immersed in the early 1600's. It was agreat experience, which I'd never trade for anything, but I was ready to come back to my own century.

I was drawn right away to the idea of chronicling Pixar's history. I'd been a fan since the early shorts of the 1980's. Pixar's body of work amounts to two decades of sustained excellence, for the most part, which is something you don't witness very often in life. It's such a rarity that I think it invites the question, how did this come about? What's the real story? And, of course, there's an important piece of business and technology history built into it, which was attractive to me.

I know I'm probably alone in thinking this, but I do believe the stories of Jamestown and Pixar have something in common in that they're both journeys into uncharted territory.

DG: Who were the people you interviewed who gave you the "key" to what the Pixar touch is?

DP: I approached current and former employees and other people who'd had a role in the story. Several dozen or so of them helped me, including one of the co-founders (Alvy Ray Smith), production and business executives, technical people and animators, you name it. Most were former employees who could talk about the company freely – and affectionately, I should add. After Alvy and I got to know each other, he was really generous in allowing me access to his old Lucasfilm and Pixar files.

There were other sources who are harder to classify. Harrison "Buzz" Price, no relation, who used to be Walt's numbers guy in the planning of the theme parks, later was heavily involved in shaping the California Institute of the Arts; he shared some background on CalArts, pre-Lasseter. A former senior-level Microsoft executive and a former Pixar person were separately able to confirm the rumors that Microsoft discussed an acquisition with Pixar in 1994 and they set the scene for me. So it's really an eclectic group.

Getting back to your question, I don't think I talked with anyone specifically about the meaning of the "Pixar touch" itself. I'd say the Pixar touch is something anyone can see onscreen and interpret for themselves. For me, it's a level of artistic and technical quality and a level of sharpness and intelligence in the script. In the strongest films, I think the Pixar touch is also a level of complexity in characters who appeal to children but who are struggling with adult-like problems.

DG: What were your most important discoveries while conducting your research?

DP: Wow, let's see. I came into the project knowing a fair amount about the company, so my perspective might be different from some other people's. I was surprised by the number of companies that turned down Lucasfilm when it was trying to spin off its computer graphics group before Steve Jobs finally bought it. I hadn't known how much Pixar's early years as a computer hardware and software company were shaped by Steve's vision of bringing 3-D graphics technology to Everyman. I was interested when I got hold of the original Disney-Pixar production contract and I saw how one-sided it was. I was surprised at how inexpensively Toy Story was made.

I knew generally that Pixar's directors and artists tend to be very committed to research on the subjects of their films, but until I worked on the book, I didn't appreciate the extremes to which they sometimes take that research. I don't think it's widely known that Ratatouille had another, unpublicized director between Jan Pinkava and Brad Bird. Just to take a few things more or less at random. When I was writing, I wasn't necessarily looking at my factual finds as discoveries in their own right as much as I was trying to understand their relationship to a larger picture.

DG: Did you study Disney history before researching Pixar history?

DP:It isn't my background, but yes, I did study it. It became obvious pretty quickly that one can't understand the history of computer animation without some grounding in the history of animation in general and Disney animation in particular. So I got to spend time with books, films, old issues of Animato, etc. I was fascinated to learn how much historical work is being done by people outside the academic community who are doing it for love of the subject. A few accessible sources I'd recommend to anyone are Michael Barrier's Hollywood Cartoons, Tom Sito's Drawing the Line, and the Walt's People series. Remind me, who's that guy who does Walt's People?

DG: Any special anecdotes linked to researching or publishing that book?

DP: It was a lot of work, like any other big project, but it didn't always feel that way -- talking for hours with amazing people, watching the shooting stars overhead in Pixar's main theater, taking in the Sonoma Film Festival, tooling around Woodside (the town where Steve was living when he bought Pixar), poring through Ed Catmull's Ph.D. thesis ... It was a case where, as Noel Coward is supposed to have said, "Work is much more fun than fun."
Posted by Didier Ghez at 12:34 AM

Still, I share the belief of Steve Jobs, Ed Catmull and John Lasseter and countless others who say learning is a lifelong pursuit. It's nice that they, as employers, encourage discovery and exploration. My quest to know more about Disney and Pixar will never cease.

I've read "To Infinity & Beyond!" by Karen Paik and featuring a wealth of information from documentary filmmaker Leslie Iwerks' interviews for "A Pixar Story."

But I'm encouraged that David A. Price has talked to many former Pixar employees -- because sometimes the best stories are ones that people still tied to the company don't think are important or don't want to disclose.

It's also interesting that Price says these former employees also talk "more affectionately" about the company -- reminds me of the line in a Janis Joplin song: "Sometimes you don't know what you've got 'til it's gone."

I know many people who "would give their left lug nut" to work in any capacity at Pixar (even more so than Disney). I'm certainly one of them and I wonder if Price would now consider himself among those ranks.

Just the idea that he talked to Buzz Price (a character in his own right with a great sense of humor) and has more information about the early days of CalArts is further enticement.

I didn't know about a third director on "Ratatouille" sandwiched between Pinkava and Bird -- so that's intriquing.

It's also nice to see the titles of a few more books like "Drawing the Line" to add to my list.

Thanks for conducting and sharing the Q&A.

Thanks for the kind words. No, just the blog.

Thanks for the info! We're making a custom pair of slippers for you :)” oh wow thank you!!