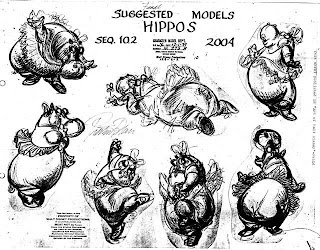 Those three model sheets from Preston Blair just in thanks to Göran Broling who mentions:

[I thought you may be interested to see three Fantasia model sheets that Preston Blair sent me back in 1980. He did not send me Disney Studios "original stats", but ordinary photostats. original stats used by the the Studio were copied on a thicker paper and with a different technique, I have been told. However, he did sign them for me, and if you look close you can see that Preston drew a line over "Suggested", and wrote "Final", since his design of the hippos was approved by Joe Grant.

I think there are many lovely poses here, and according to Preston in 1980, only one have ever been published before! Model sheet_1 was published in Field's "The Art of Walt Disney". Since you recently have published several funny photos online with Hattie Noel, I came to think that these may be nice to publish too.] 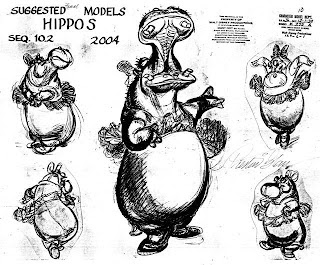 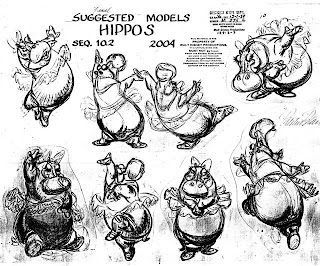 those are amazing thanks! i love the way preston draws fat animals!

FYI, I will need to check again tonight if they were the originals or not, but I saw these items on Ebay last night.

I think I have bought the original (negatives) of these 3 hippo disney stat prints yesterday at an auction of Preston Baird's estate. There was also a number of additional prints from Fantasia as well. Let me know if you are interested, and I can send you copies.

Thanks a million for this. Yes, I would love to get copies!