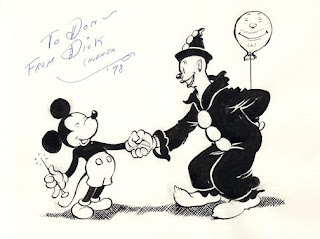 A book that we will definitely all want to pick up next month is Working with Walt: Interviews with Disney Artists by Don Peri. While the book will not contain any illustrations, Don was kind enough to share with us a drawing that Dick Huemer created for him.

[Once I asked Dick Huemer to do a sketch for me of Mickey Mouse shaking hands with Koko the Clown since Dick had been a prominent figure at both studios (Fleischer and Disney), and the finished drawing—so typical of Dick’s wry wit—has the two figures shaking hands, with Koko, behind his back, holding a balloon featuring Dick’s caricature and Mickey, behind his back, holding a long sharp pin.]

I have also received yesterday the official press release:
[Those working close to Walt Disney reveal puzzlepieces of his character and drive

The cultural significance of Walt Disney (1901–1966) cannot be overstated. He created or supervised the creation of live-action films, television specials, documentaries, toys, merchandise, comic books, and theme parks. His vision, however, is revealed in his animated shorts and feature-length cartoons, which are loved by millions around the world.

Working with Walt: Interviews with Disney Artists (University Press of Mississippi) collects revealing conversations with animators, voice actors, and designers who worked alongside Disney during the heyday of his animation studio. The book includes fifteen interviews with artists who directed segments of such classic animated features as Dumbo and Fantasia. Some interviewed were part of Disney’s famed team dubbed, “The Nine Old Men of Animation”; and some worked closely with Disney on Steamboat Willie, his first cartoon with sound.

These directors, designers, artists, and technicians discuss the studio’s working environment, the heyday of animation during Hollywood’s Golden Age, and Walt Disney’s mixture of childlike charm and hard-nosed business drive. Through these voices, Don Peri creates a compelling oral history of an overlooked aspect of Hollywood during the studio-system era.

Collected together, these interviews begin to resemble a puzzle. And each conversation, as Herb Ryman states in his interview, “is a little part of the puzzle, the jigsaw puzzle, that goes into the portrait of Walt Disney.”

Through these voices, Peri preserves views of the Disney magic from those who worked closely with him. Working with Walt provides absorbing, informed accounts of Walt Disney, as told by people who knew and worked with him closely.

Don Peri of Davis, California, first gained the confidence of Disney insiders through his work with animator, director, and producer Ben Sharpsteen. He has written and published extensively on Walt Disney’s productions.]
Posted by Didier Ghez at 2:15 AM