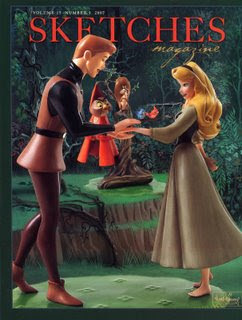 A few odds and ends:

- News about Walt's People - Volume 6: I have received this weekend the last corrections on the manuscript, which I will integrate within the next few weeks. Pete Emslie is working on the cover (but we are missing video footage from Roger Broggie to get 4 caricatures instead of three). Provided we can solve this remaining issue soon, I am hoping to get this volume to the publisher by early January and have it ready by March at the very latest, a bit later than I had hoped.

- I received last week some wonderful new interviews for future volumes of the series, especially an extremely in-depth interview with Art Stevens by Pete Docter and a fascinating "best of" from the exchange of letters between Göran Broling and Frank Thomas that spans from 1979 to 1996.

- One last thing: I bought a few months ago on ebay all the issues of Sketches Magazine from Volume 1, number 4 to Volume 8, number 2. Would any of the readers of this blog have any of the missing issues for sale?
Posted by Didier Ghez at 2:31 AM