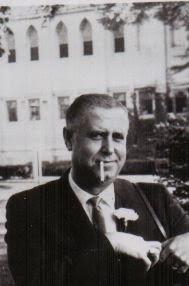 A few months ago I posted some information about Disney artist Bob Wickersham. His son David was kind enough to send me last week a photo of his father taken around 1960. JB Kaufman added the following information about Bob's work on Snow White:
[For that film he was one of the dwarf animators. He did some of the scenes of the dwarfs sneaking into their home when they first returned from the mine and discovered there was someone inside (this was known within the studio as the "Spooks" sequence). Later, during the bed-building sequence that was cut from the film, he animated at least one scene of Happy sewing.]
Posted by Didier Ghez at 8:41 AM