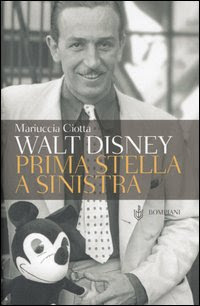 While browsing this morning, I just discovered two foreign books about Disney I had never heard about.

One is from Italy, Walt Disney: Prima Stella a Sinistra (Walt Disney- First Star to the Left) by Mariuccia Ciotta (Bompiani, 2005).

The second one is from Norway, Jakten Pa Onkel Walt: Fire Nr-Disney-Opplevelser by Anders Giaever (Cappelen, 2001). Would any of the Norwegian readers of this blog be able to share some information about it?
Posted by Didier Ghez at 2:53 AM

I just cuneiformed my way through this page on www.internetbookshop.it to order it...

The translation of the title is "The Search for Uncle Walt: Four Near-Disney Experiences". The author is a Norwegian journalist who has been writing Disney-related material for years. Based on some of these experiences, among them a vistit to Carl Bark's home in the mid-1990's, he has written about the impact of American Disneyana on World Culture from a personal point of view.