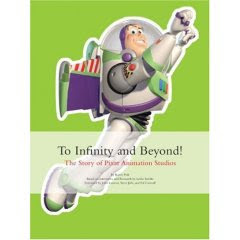 I updated the Disney Books Network this weekend.

By the way, quite a few of us are looking forward to the release of To Infinity and Beyond!: The Story of Pixar Animation Studios at the end of this month, but blog reader Ross Anderson sent me the following note about another upcoming book about Pixar that could prove to be a fascinating read:

[The Pixar Touch: The Making of a Company (Knopf) will be published in May 2008.

The author, David Price, works at SIGGRAPH. The book is focussed on the individuals who catalysed the genesis of Pixar.]
Posted by Didier Ghez at 12:42 AM