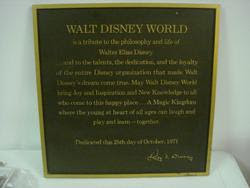 A friend just found this item, while browsing on ebay.
[Orlando, FL, October 2007 - Starting today get ready to be a part of Disney magic and own a very rare piece of Walt Disney World history, The 1971 Disney World Roy Disney dedication plaque from the opening of the Walt Disney World Resort in FloridaThis one of a kind piece is the actual wood dedication plaque that was held by Roy Disney (Walt Disney's brother) for the dedication ceremony on October 25th, 1971, since the bronze one was too heavy to lift. The plaque reads "Walt Disney World is a tribute to the philosophy and life of Walter Elias Disney and to the talents, the dedication, and the loyalty of the entire Disney organization that made Walt Disney's dream come true. May Walt Disney World bring Joy and Inspiration and New Knowledge to all who come to this happy place. A Magic Kingdom where the young at heart of all ages can laugh and play and learn-together. Dedicated this 25th day of October, 1971."]
It almost looks as if the old Disney Auctions is back under a new name (Surplukingdom). They have quite a few cool stuff from the Disney parks on auction.
I am not sure about my feelings, though, when they start selling historical items like this one.
Posted by Didier Ghez at 5:22 AM