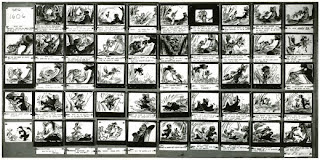 - Bill Peet’s Tar Baby pt 1 by Michael Sporn
- Woman Power Revisited by Hans Perk (I hope someone will soon face this challenge and work on a very in-depth piece about women in Disney animation. I would publish it with real pleasure and excitment.
- Fred Moore and Family by Jenny Lerew
- My Journey to the Great White North by Michael Barrier (especially the part about the new Goofy short).
- Schulz and Disney and Walt's Hawaiian Holiday both posted by Michael Barrier on October 21, 2007.

[I have to admit that I disagree with Michael about the "exploitation" of Walt Disney at DCA. I tend to see the use that is made of Disney history icons and even the new statue of Walt as hommages to the man and a great way to introduce new generations to who he was. I first learned about Walt himself through a comic book retelling of his life in the French Mickey Magazine (Le Journal de Mickey) and that is part of what led me to try anf know more about him. I doubt that cynicism is at work among the imagineers today when it comes to those "Walt" touches in DCA. From what I know of John Lasseter, he truly respects Walt and Walt's history and is constantly trying to pay tribute to him, directly or indirectly.

I had a similar discussion with a friend this weekend about the use of a quote from Walt as the main theme of Meet the Robinsons (which I finally saw this weekend). In this particular case, I was the one who was wondering if there wasn't some amount of cynicism in that use. But my friend reminded me that quite a few of the best Disney artists do truely respect and admire Walt and love to pay subtle or less subtle hommages to him, so that there was a good chance that this particular reference was sincere.

In case you wonder: I disliked the first part of the movie and loved the second one (from the moment when the villain reveals who he is).]
Posted by Didier Ghez at 12:14 AM

I am amazed at how able you are at finding these links! Thanks for taking note of mine, too.

I agree completely with your reaction to Michael Barrier's thoughts regarding the proposed California Adventure changes; I was torn between posting about it myself(I started an epic, and decided it was just too long), and emailing Mike, which I'll probably do, but anyway--I think he misjudges the intent of those in charge--in particular John lasseter. I can't believe he'd opt for anything exploitative or kitsch. The worries he expresses are the fallout of an entirely different regime at the company. I'm sure he'll be pleasantly surprised(at least I hope so!).