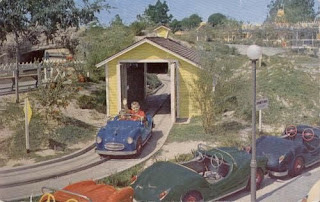 [Marceline, Missouri has decided to restore to operating order the famous Midget Autopia that originally was at Disneyland and then donated by Walt himself to Marceline (Walt's hometown) where it ran for many years. The only Disney attraction that operated outside the theme park. The still existing cars and the track have been examined by experts, and historians have been consulted for their input.

Sadly, those of us who enjoyed the attraction as children will be unable to fit into the cars once it is restored. The row of cars in front is a "storage" lane next to the "load" lane. Kaye Malins who is heading up the Disney Museum in Marceline as well as this new project has one of the original yellow cars in the museum. For more information on the museum go to this link.]

Really interesting news Didier. Are these cars different from the ones that were replaced by the 1997/1998 Tomorrowland revamping?

Hmm, please correct me if I'm wrong, but I thought the Disneys also donated the ViewLiner train to Marceline.

It might not have ever operated in Marceline, maybe it ran for a very short time, or maybe I simply remember reading something that wasn't true.

Of course, very few members of the public and early visitors to Disneyland remember the ViewLiner since it was in the park less than 2 years.