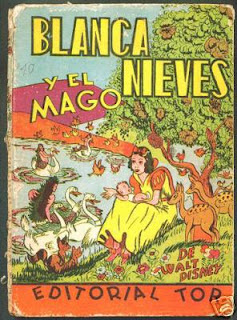 I once wrote an article for Tomart's Disneyana Update about the Argentine Disney licensee from the mid-40s, Editorial Tor. I own all of the hard-cover Disney books published by Tor, except for two: The Tortoise and the Hare and Snow White and the Magician. The later was sold on ebay yesterday. I lost the auction, unfortunately, but I thought some of you would enjoy seeing its cover.
Posted by Didier Ghez at 1:19 AM