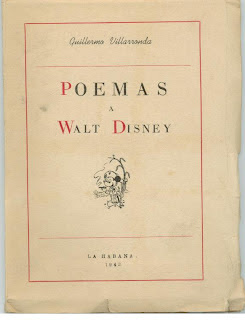 And I thought I knew all of the obscure Disney-related books. Not so! I just received yesterday this amazing publication from Cuba (La Havana, 1943). 58 pages of poems inspired and dedicated to Walt Disney by Guillermo Villarronda.

Here is what I managed to find about the Cuban poet Villarronda:

His real name was Guillermo González Gómez. He seems to have been born in 1912 in Cuba. He started a journalist career in 1935. In 1937, he won the National Price of Poetry of the Education Ministry for his poem Hontanar. He worked for the newspapers El Eco de Tunas, Orto, Martí, Gaceta del Caribe, Bohemia y La Verónica, in which appeared his «AntiOda a Pablo Neruda». He was the editor of El Espectador Habanero, Acción, Pueblo and Alerta. He adapted novels for the radio and was a journalist on the radio station Radio Aeropuerto Internacional. He was also closely linked to the dictature of Fulgencio Batista and left Cuba shortly after the Revolution.
Posted by Didier Ghez at 12:34 AM