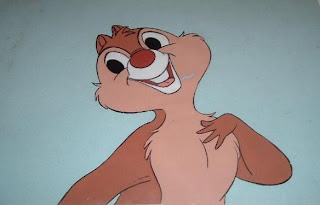 This just in from Rob Richards:

This weekend I acquired another wonderful Disney animation cel from eBay.

I like to say every cel has a story to tell.

This has the original Art Corner Gold Seal, dated 1959. So its authenticity is irrefutable.

However, it provokes some fascinating questions. Like, for starters, what film it is from... (or possibly early TV animation.) I don't have the cel yet, but from the photo the lines appear to be xerographic. Being dated 1959, this would be during the earliest days of xerographic lines (and 101 Dalmatians, the first feature to use the processs [from end to finish], was undoubtedly in production at this time.)

While the characters Chip 'n Dale were nearly identical, I am sure you know they had distinguishing features: "Chip" has a brown nose (think chocolate chip) and "Dale" has a red nose and buck teeth. But - this cel has a red nose but no buck teeth! Maybe Dale saw a Disney orthodontist?