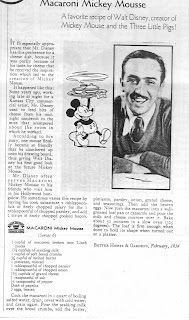 Walt Disney's daughter, Diane, has stated that many early years of trying to save money resulted in her dad developing “a hash house-lunch wagon appetite. He liked fried potatoes, hamburgers, western omelets, hotcakes, canned peas, hash, stew, roast beef sandwiches. He doesn’t go for vegetables, but loves chicken livers or macaroni and cheese.”
While Walt's famous chili recipe has appeared a number of times, Disney Historian Jim Korkis recently discovered one of Walt's favorite recipes for macaroni and cheese that has never, ever been reprinted. In appeared in the February 1934 issue of the magazine "Better Homes and Gardens".
Posted by Didier Ghez at 12:25 AM

What an excellent opportunity this would be to find a link to Walt's Chili Recipe...
[clapping hands]