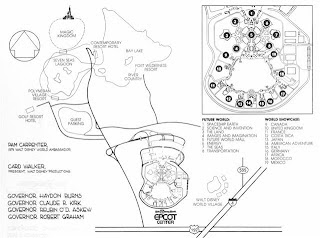 There are less than thirty-five days until WDW's Epcot celebrates its 25th birthday. From the collection of Jim Korkis, here is the program from the October 1, 1979 groundbreaking ceremonies for that theme park. Looking closely at the map, you can see many differences between the groundbreaking and the opening two years later. For instance, there is a pavilion for Costa Rica but no pavilion for China. The Imagination pavilion is named "Images and Imagination". Walt Disney first announced his plans for Epcot on November 15, 1965 at the Cherry Plaza Hotel in Orlando, Florida. The hotel no longer exists.
Posted by Didier Ghez at 12:37 AM