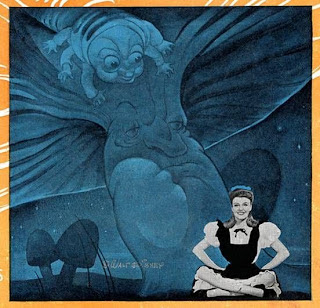 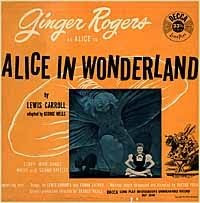 This just in from Jim Korkis:
[This Alice in Wonderland version was produced specifically for release as a sound recording. Initially on a set of three 78rpm records on the Decca label in 1944. It was re-released in 1950 in 7" 45 rpm format and as a 10" LP. The cover art was copyrighted by Walt Disney. In fact Walt Disney was supposedly considering an 'Alice' movie in 1944, with famous dancer, Ginger Rogers, playing the lead. This is the 10" vinyl LP version and, to quote the rear cover, "The heroine of a hundred motion pictures triumphs in her new and most endearing role: the Eternal Child".]
Posted by Didier Ghez at 1:08 AM