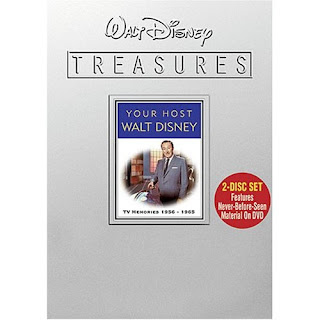 [When I came home, I was too tired to go out and see the July 4th fireworks, so I spent the time watching the DISNEYLAND '59 special on the YOUR HOST, WALT DISNEY Disney Treasures DVD.

It was amazing to see actors Clint Eastwood and Dennis Hopper in a Disneyland parade. It was interesting to see how gracious and friendly Vice President Richard Nixon was to Walt Disney, quite a different persona than the embattled Watergate villain of decades later. Also, it made me smile to hear host Art Linkletter say that Walt was "the happiest kid in the park". But what was really amazing to me is that I had heard that Walt was embarrassed because he would move his lips when he read something. I had seen that happen on a clip of Walt doing the voice of Mickey Mouse for "Mr.. Mouse Takes a Trip" with Billy Bletcher as Pete when Walt was mouthing Billy's lines while Billy was saying them. However, in this special, when the Admiral is reading the dedication of the Submarine Voyage ride he must have been reading off of cue cards because you can see Walt standing next to him mouthing the exact same words! It seems to go on forever and Walt seems to be totally unaware that he is doing it!]