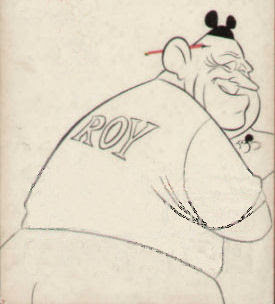 [Ken Anderson shared this story with me in 1985 and will appear as part of the interview I did with him in a future volume of Walt’s People:

Here’s a story I love. Roy Williams was a legend. Roy was a 320 pound former All American high school football player. He was a little baby. He was a child. He was a naïve child in this great body who could throw people around. An enormous gag man. He just churned out these cartoons like you wouldn’t believe. Walt decided that Roy should be a little more dignified so we helped Walt out.

When Roy was made a gag captain we made it an important thing. He had to wear a suit, tie, and a vest….and socks. Everything. Then he came over to this new building. They were really just a couple of apartments we had gutted and made into rooms for the storymen.

We had Roy all dressed up. I got Ethel, who was his wife, to make sure Roy wore the suit and everything. It didn’t really fit. Nothing buttoned. Nothing really worked. As gag captain, one of his jobs was to go around and “pass” on the gags that everyone had done. He came into the room.

We took this little guy, Joe Sable, who was a new guy who was maybe five foot two and weighed all of eighty pounds. We took T. Hee’s pants. T. Hee was a big man in those days. He lost over three hundred pounds. We took his pants and wrapped them around and around Sable and tied it up with a belt.

So Joe is saying, “Mr. Williams, is this gag acceptable?”

Joe says, “Yes, sir but what’s good for one person isn’t necessarily good for another.”

Roy is getting desperate. “Never mind that. What have you been on?”

Joe says, “I hate to tell you but it was sauerkraut juice. You should probably check with your doctor. Now about this gag…”

Roy bolts away and calls his doctor. At least he had that much sense. He got the nurse and asked her if sauerkraut juice is good for diets and she says “yes, but…” and Roy hangs up before she finishes and runs across the street and got a gallon of sauerkraut juice and drank this whole can.

The meeting with Walt on gags is due to come up in less than ten minutes. This whole business began to work on poor Roy’s insides and there was a lot of Roy to work on.

Have you ever heard elephants trumpet? That was the sound coming out of him. Roy would come in to the boards and these sounds are starting. Boom. Boom. He runs down the hall to where we had a lavatory and we hear “Bang! Bang! Bang!” We had the doors all locked.

Then we had the next building fixed the same way. Wherever he went there was no chance for him to get any relief.

Walt comes in and sits down on a camp chair and he is already drumming his fingers and saying, “All right. All right. What have you boys got here?”

Roy tries to start telling Walt the gags and he just can’t take it any more. Roy bolts out of the door and knocks over everyone in his way and makes it across the street to the main building finally.]
Posted by Didier Ghez at 12:38 AM