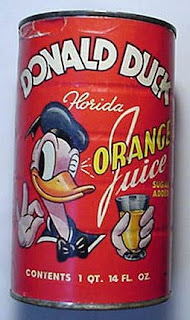 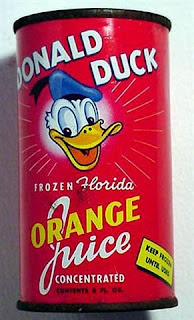 Donald Duck Orange Juice is the longest surviving Disney licensee starting in 1941. The orange juice is still produced in Lake Wales, Florida not far from Walt Disney World. Although I still don't know what a duck has to do with citrus products (other than the fact that Donald Duck was a hugely popular character during the Forties), I just discovered the following information about Donald Duck Orange Juice during World War II:

"Sixty boxcars of fresh citrus fruit a day are being processed by Florida Citrus Canners Cooperative at Lake Wales. About 40 of those boxcars of fruit are converted into 8,000 gallons of orange concentrate destined exclusively for the United States armed forces and their allies. Total volume of concentrate was expected to reach 800,000 gallons. When reconstituted on the basis of 7 gallons of water to a gallon of concentrate, it will produce 6.4 million gallons of juice with vitamins added. All will be shipped under the coop's Donald Duck brand. Concentrate production has been boosted by the need to reduce shipping space. Concentrate requires only about one-eighth of what fresh fruit requires. "]
Posted by Didier Ghez at 3:59 AM

Many Disney licensees struggled during the war when rationing came into effect. The licensing of food products was one way Disney merchandising rep Kay Kamen kept money flowing into the coffers: peanut butter, jam, popcorn, mustard, chocolate syrup and juices were all produced under the "Donald Duck" label.