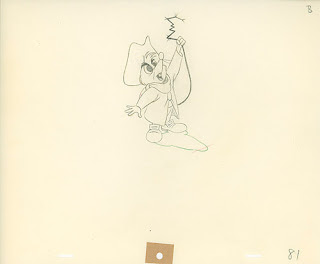 This comment by Pete Emslie is too good to get lost in the comment section. His idea sounds brillant to me, if Disney Toons can come up with story artists at least half as good as those who worked on the featurettes. No easy, of course, as Ben and Me's story artist was none other than Bill Peet. But certainly doable.
["Ben and Me" is not only a fine topic for a July 4th post, but also ties in very nicely with the release this past weekend of "Ratatouille". Both films share the theme of a human acting as a front for a rodent with exceptional abilities. I have always loved "Ben and Me" since first seeing it on the Disney Sunday TV show back in the 60's. Actually, I would hold up "Ben and Me" as a shining example of the type of cartoon that Disney Toons should now set out to create, now that John Lasseter has wisely decreed that there will be no more sequels to the animated classics forthcoming. There must be tons of great little stories out there that are just perfect for adapting as 20 to 40 minute featurettes. Is Disney Toons up to the challenge?]
Posted by Didier Ghez at 12:15 AM