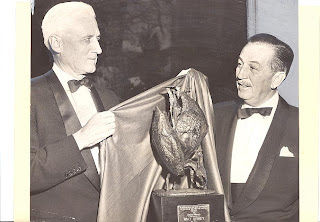 Walt's People - Volume 6 will feature a great interview with Ken Anderson by Jim Korkis. I was extremely happy to stumble this morning on ebay upon this photo of Walt and artist Gordon Woods which illustrates one of the best stories told by Ken in that very interview:
[On Sleeping Beauty, I was invited to go with Walt to this hoity-toity party in San Francisco. It was a men’s club, no women, and was very expensive and prestigious. Presidents of companies. That sort of thing.

It was all in honor of Walt and Sleeping Beauty. I had the honor of going along and drawing whatever Walt said I could draw. They gave him this award, this prize that looked like a burnt turkey on a pedestal with its legs sticking up in the air.

It turned out the artist was there and he came up and met Walt and they began talking and laughing. He and the artist became close friends right away like they understood each other.
Walt said, “What is this?”

Everyone else in the room was just looking goggle-eyed at them.

Walt said, “I understand what this burnt turkey is now and will be proud to take it back with me to the Studio.”]
Posted by Didier Ghez at 12:34 AM