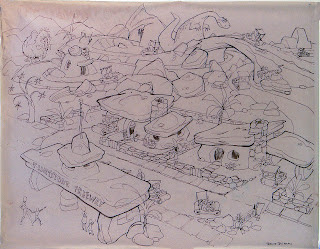 This just in from Todd James Pierce:

[I enjoyed Jim Korkis' article on your site a few days back. Very little has been written about Bruce Bushman, but he was central to the development of Disneyland. He was one of the few animators who transferred over to the WED design team in 1953 and 1954. He was a large man who enjoyed playing Santa Claus for various charities. Each Christmas he spent many days inside of an elaborate Santa's Village. And perhaps through this experience, he developed an intuitive sense of how children would respond to created fantasy environments such as those Walt Disney hoped to build at Disneyland. To a great extent Bushman was responsible for the overall "look" of Fantasyland, developing a cohesive color palette for the area and focusing his attention on how the various rides might create a unified presentation. Some of my favorite Bushman designs were never built, such as the Pinocchio boat ride. In the Pinocchio boat ride, guests would float by scenes from the film, before finally plummeting out Monstro's mouth, whose extended tongue was arranged as a 30-foot flume sending flat-bottom boats down to a large splash lagoon. It was an imaginative version of the popular "shoot-the-chutes" boat rides found at many beachside parks in the 1950s.

But the real reason I'm writing is to share some artwork. After leaving Disney, Bruce Bushman helped design a number of non-Disney theme parks. In Jim Korkis' article, he included a link to Dan Goodsell's wonderful blog which included some scans of artwork for the proposed Hanna-Barbera Land. Dan's blog has some fabulous images of rides fashioned after the Jetsons and Yogi Bear's Jellystone Park. But I wanted to send along two images for the proposed Fred Flintstone ride. (I know one Flintstone image is on Dan's site). But in these two images, you can see both the overall track design for the Flintstone ride and also the vehicle design. It would've made for an interesting park. 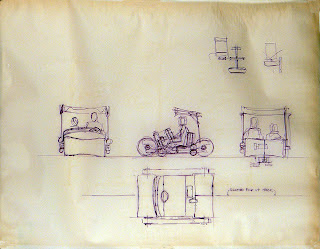